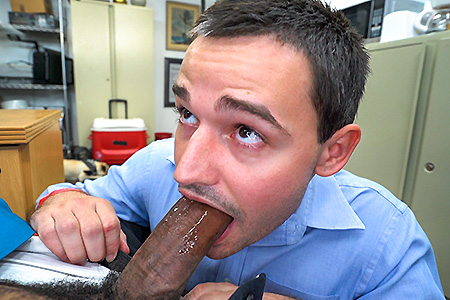 Fuck this cracker bitch and his little dog too!

This white motherfucker thought he was walking into the land of Oz or some shit. He thought it was cool to just bring his little dog with him too. The only lion he’s going to meet here is me and my hard black dick. It’s harder than any tin motherfucker that’s for sure. This cracker thinks his resumes would get me hard or something but I’m like fuck that shit. I ripped it in half and threw it right back at him. He tells me he needs money so I tell him the deal. He says he’s not gay. Like I give a fuck what this cracker bitch thinks or says. Suck my black dick or get nothing and get the fuck out you cracker bitch. Dorothy here was on his knees sucking my dick after that and then I fucked his lily white ass for all it was worth. I wouldn’t have paid more than three-fiddy for it. Dumb cracker.